I am embarrassed to say that my family owned two of these stunners.  A 1990 Dodge Grand Caravan (because with 6 of us we needed the extended body) which burned through 2 transmissions and died with the front passenger door welded shut and 2 Ford Escorts.  One a Hatchback which served 3 of my sisters well in our high school days and a 4-door which was totaled (thankfully without very serious injury to its driver).

What do you think of Hagerty's list of cars that will soon be extinct?  Should we be trying to save them one by one or simply let them fade off into the sunset? 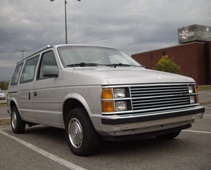 We love to insure classic cars.  Call us at 978-352-8000 or email info [at] georgetowninsurance [dot] com for more information.

There are no comments yet.

Required fields are marked with ✶