I have a 2 year old daughter who loves to be 'helpful'.  She will help with anything from being my personal currier to feeding our dog and most of the time her help is well received.  But every once in a while her help is not so helpful, like when she helped me clean the bathroom by putting a whole roll over paper towel in the toilet!

This losses and lessons highlights when helpful is not so helpful. 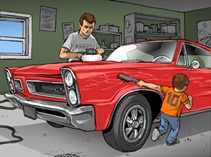 WHAT WENT WRONG: Parents who’ve been publicly embarrassed by their children’s uncanny ability to repeat a cuss word at the most inopportune time can attest to this undeniable fact: Kids emulate adults. Sometimes that’s incredibly cute; other times it’s incredibly unfortunate. The owner of a 1965 Pontiac GTO spent an afternoon detailing his classic while his 2-year-old played on a tricycle nearby. When Dad began using a power buffer on the passenger side of the car, his son decided to “help Daddy” on the other side by “cleaning” with a wire brush that he’d found on a shelf.

DAMAGE/LOSS: Before Dad realized what his son was up to, the toddler had scratched the paint from front to back on the driver’s side of the car. Cost to fix the damage was $2,500, which Hagerty paid.

LESSON: Even the best of intentions can lead to disaster. Sure, you want your kids to follow in your footsteps when it comes to loving classic cars. But make sure they’re old enough to appreciate their value, both emotionally and monetarily. And teach them how to properly care for them – as soon as they know the difference between a tooth brush, a soft brush and a wire brush.

Make sure that you have the right coverage in place before something happens.  Call us at 978-352-8000 or email info [at] georgetowninsurance [dot] com

There are no comments yet.

Required fields are marked with ✶